I forgot to post my totals yesterday. Last week was poor on the running front, with just 14km logged. With all the other activity taken into account, the Juneathon totals so far are:

Now, I think I need to be realistic about that goal of hitting 100km this month. I’m off to Glastonbury on Thursday, so I’ll be missing a whole weekend. I can probably squeeze in two or three runs before I go (including a long run on Wednesday), but I think it’s likely I’ll not hit that target.

It’s ok though. Juneathon has not been a total bust and it has certainly kept me on the straight and narrow on days when I would have otherwise sacked it all off. And a run total in the 90kms will be pretty good.

Today was a proper stretch session to help ease my slightly achy post-10k muscles, with a bit of core thrown in for good measure.

Apologies for the brief hiatus. I have no real excuse other than not getting around to posting, which is a poor show indeed. I realise this probably knocks me out of Juneathon, but rules are made to be broken, right?

Day 19 was a sorry mess of a hangover, thanks to seriously over-indulging at the aforementioned wedding. I attempted some half-hearted stretching and shuffled around the shops looking for last minute festival purchases. Nothing to see here.

Day 20 was a bit better. Some more stretching and some core exercises in the morning. Then we went off to the Carston Holler exhibition at the Hayward, which was extremely fun and interactive. AND it involved leaving the gallery via a huge slide: 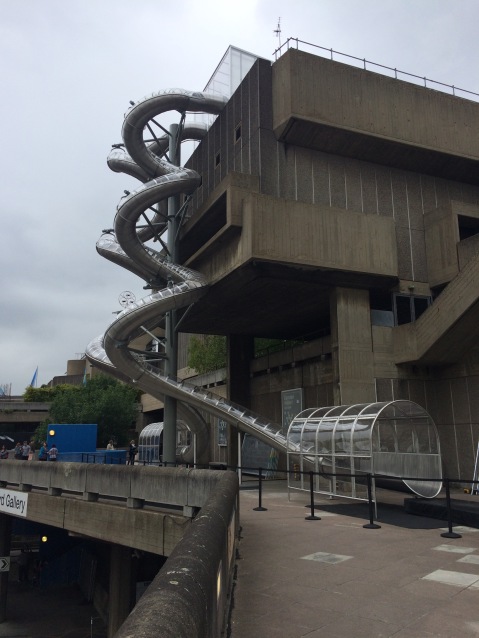 If anyone is in London over the summer I really recommend going – it really is a lot of fun. 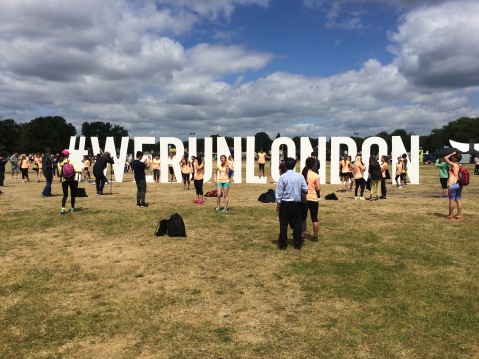 It was the Nike Women’s 10km in Victoria Park in East London. It’s the second time I’ve entered, but only the first time I ran it. Last year it was a night time race and there were engineering works, so it would have made it a very long and tricky journey home late at night, which I didn’t fancy. Plus Eurovision was on.

Anyway, today was a 10:30am start and all the transport was working beautifully, so there was no excuse!

It was a nice race. The start was delayed quite a bit and I didn’t get going until after 11am, but it was lovely and sunny so I didn’t begrudge the delay too much and apart from that it was really well-organised. The race itself was two loops of the park, fairly flat and wide paths, so all in all quite enjoyable. Some dodgy race etiquette though, with many runners not following the request to run on the left so that the lapping faster runners could pass easily on the right. I think I would have been annoyed if I was a faster runner going for a PB, but I guess you have to expect a bit of that in these bigger races.

A final word on the race. It is worth entering for the swag! I think it cost me £28 and the race t-shirt alone was worth that (lovely peachy/orange dry fit number with LONDON emblazoned on the front), but the goody bag was also great. As well as the standard fruit, snacks, drinks and vouchers for random stuff, there was a little pack of posh toiletries (including a Liz Earle  skin tonic spritzer) and instead of a medal we got an Alex Monroe necklace which is really pretty. If it had been a rubbish race then all this wouldn’t matter really, but because it was such a nice one I’ll definitely be back next year. Transport and Eurovision permitting 😉

Is anyone still up?

Today’s activity was far too much dodgy dancing to 80s tunes at a friend’s wedding.

Yes, Thursday is a strange day to have a wedding. Lots of fun though!

Well. I was supposed to go for an interval run this morning and was all dressed and ready to go. Unfortunately my tummy had different plans and I had to abandon the run, knowing I wouldn’t have got very far without things going very bad indeed.

Oh well. I squeezed in 20 mins of stretching and core before work, thinking I would get the train to London Bridge and walk to Covent Garden from there. Unfortunately a broken down train in the New Cross area had other ideas, so that scuppered that.

Oh well. I got my walk in the end though, taking advantage of the beautiful afternoon to walk from my office to London Bridge.

Phew. I think that counts!

Juneathon day 16 – running with my sis

Thankfully I had a much better night’s sleep last night, which was just as well because I had a rare appointment to run with my sister this morning.

She’s not normally one to join me on my 5:30am runs, and who could blame her, but she wants to get more runs in during the week and, like me, she’s not a fan of an evening run. Unlike me however, she doesn’t much like running alone, so only usually manages weekend runs with either me or a friend. So today was a bit of a test to see if she could manage an early run with me.

I think she enjoyed it! She didn’t hate it anyway, which is good. I must admit it made a lovely change to have some company. It was a nice chatty run, quite slow as a result, but really enjoyable. We couldn’t not talk about last night’s Game of Thrones after all!

Sooo tired. Had a bout of insomnia last night, followed by a day filled with meetings so I’m not feeling particularly verbose tonight.

Managed 30 minutes of strength training, focussing mainly on my arms and back which, despite the lack of sleep, felt like a decent workout.

Right, I’m off to watch the final Game of Thrones (having completely failed to avoid the bleeding spoilers on the internet, despite my meeting-filled day – thanks BBC News website) and then an early night.

I just realised that I forgot to include my totals from week two in my earlier post, so rather than leave them until tomorrow or edit the original post, here is a special totals post:

That’s not too bad actually…

This morning there was much faffing as I tried to decide what to do. My initial plan was to repeat last Sunday, with a jog down to the park and using the gym machines, but my legs were feeling a bit heavy after yesterday’s long run and I wasn’t really sure I could be bothered with that.

So then I thought I might do a short out and back run, with a faster return leg. But that didn’t really grab me either. I’m planning a strength session tomorrow, so that was out too.

Eventually I settled on a cross training session on the exercise bike. Not my favourite piece of equipment, but not as hated as the cross trainer! I did about 10K in 30mins, which I can’t say I enjoyed very much, but it ticked both the daily activity box and my goal to do more cross training.

This morning’s run was all about proving a couple of things. Firstly, that I was well and truly back on the Juneathon wagon after Thursday’s slip. And secondly that I still have it in me to manage a proper long run.

One of the things that had most pleased me about the marathon training was getting to the point where 10 miles was a comfortable distance. While I am not planning any races longer than 10K in the near future, I would quite like to maintain the ability to run long. So my plan is that most weekends will include a long run of around 12K, but that once a month I’ll throw in a 16K. Today was the first attempt at this and my longest run since the marathon. 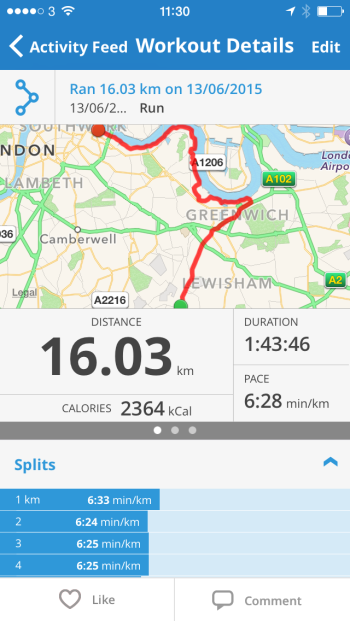 I opted for part of my favoured marathon training route, which is down to Greenwich then along the Thames Path through Deptford, Rotherhithe and Bermondsey, finishing up by London Bridge. I know the route well and it is a good one. Lots of wide, clear, traffic-free footpaths and, until you hit Tower Bridge, reasonably free of pedestrian traffic too. There’s the obvious bonus of running alongside the river for most of it, plus there are some interesting sights along the way. I love how Dickensian some of it still looks around Rotherhithe and Bermondsey in particular.

Anyway, I’m delighted that not only can I still run 10 miles, I can still run that distance comfortably and I probably could have continued on for a bit if I had wanted to, which is always a good sign.

Here are some of my favourite sights along this stretch of the Thames Path: 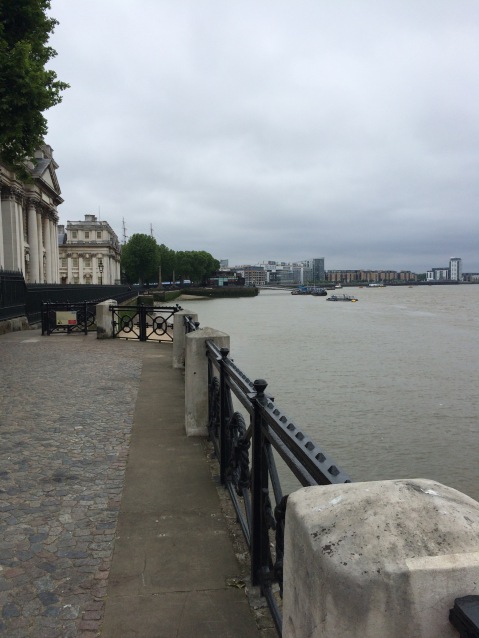 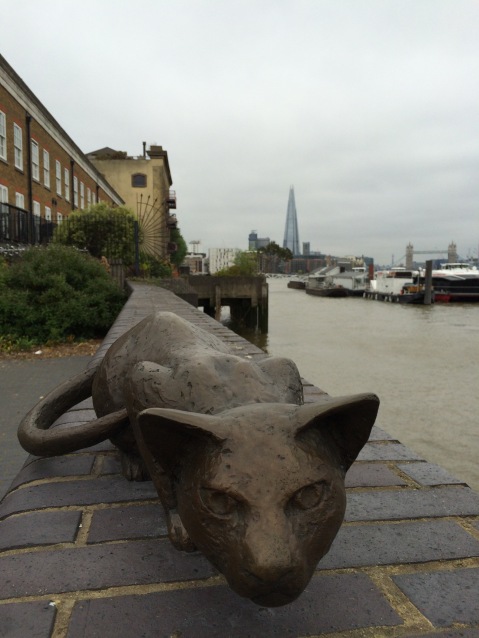 Well, that post about Junethon goals blew up in my face this week. Oops.

Have been insanely busy and I’m afraid that I have to log a didn’t-really-do-much-that-can-be-counted-as-activity day for yesterday. Very poor effort.

Today at least I managed something: 30mins of strength training. Not much to say about that, but at least it was something. Still, tomorrow is another day and all that…

I’ve also been shamefully neglecting everyone else’s blogs, which is really naughty. Big catch up session this weekend, I promise!

The road to the 2015 Brighton Marathon and whatever comes next .

To help enrich the lives of others, we developed RunnersOnTheGo.com to help runners save money on races, running stores, and much more. We also provide the specific local information that makes your travel for business, vacation, or racing as rewarding as possible.

A haphazard mix-up of exercise, music, technology and family

In the Shadow of the Rockies

Running the trails of Calgary, and beyond

Once and Future Runner

Once a runner, always a runner.

Base state: on the sofa with the cat

Rider at the Gates of Dawn

My journey from charity plodder to running coach (and back again!)

4 out of 5 dentists recommend this WordPress.com site

I was on a journey to my first half marathon and I did that June 7, 2015! Now I just want to try and stay motivated and even after 15+ years of struggling with eating healthy, stay on track with that. I want to keep doing it by inspiring others and encouraging people to live their happiest, healthiest life.